A closer look at the final - parte 1 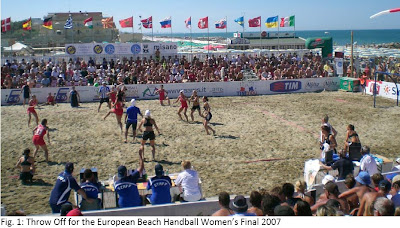 Let’s have a closer look at the finals of the European Beach Handball Championships 2007 in Misano Adriatico.
To get valid results we have to split a Beach Handball match into parts. As we can see from the results, every set in Beach Handball can have its own history and development.

To understand the tactical plan of a Beach Handball team it seems necessary to produce exact statistics from every single set of a match. It is not enough to use the indoor handball statistics for Beach Handball. We have to find out how many attacks a team has per set and how many one-point-goals and two-point-goals a team scores. We have to diversify the creative and spectacular goals (two-pointers) into pirouettes, in-flight and specialist goals, direct goals by the goalkeeper and 6-meter goals. Finally we need to learn how successful the tactical elements and the technical skills of each team are. In the following chart we have a detailed statistics of the
women’s final 2007 between Croatia (CRO) and Germany (GER).

Both teams had 16 attacks in the first set. CRO finished 6 of 16 attacks successfully (38%), they attempted 5 pirouettes (2 with success and 1 lead to a 6-meter-throw), 4 specialist shots (50% success), 1 in-flight (100%), 1 direct goal shot (which missed the goal) and they made 5 technical mistakes. Finally they scored 12 points (of 32 possible points in 16 attacks).
GER finished 7 of 16 attacks with success (44%). In contrary to CRO they attempted only 1 pirouette (which missed), 6 in-flights (4 successful), and 5 specialist shots (60% success), 1 direct goal shot (which missed) and 2 one-pointers (at the end of the set). The big difference in the first set was however only 1 technical mistake effected by GER. 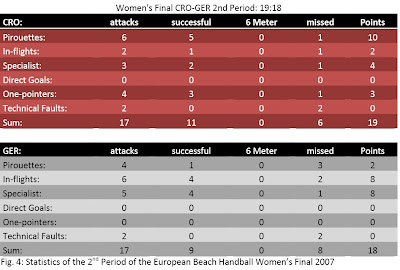 In the second set CRO improved its percentage of successful attacks up to 11 out of 17 (65%). With 5 successful pirouettes (out of 6), 1 successful in-flight (out of 2), 2 goals from the specialist (from 3 attempts) and 3 one-pointers (from 4 attempts) the team scored 19 points and made only 2 technical mistakes. But also GER improved its percentage of successful attacks (9 out of 17 = 53%), they scored again 4 inflights (out of 6), tried 4 pirouettes (but scored only 25%) and had again 5 shots from the specialist (80% successful). With also only 2 made technical mistakes the level of the second set was very high and the GER team scored 18 points. The difference between the two teams in the second set is clearly the scoring of the pirouettes. While GER scored only 1 (out of 4), CRO scored 5 (out of 6) pirouettes. 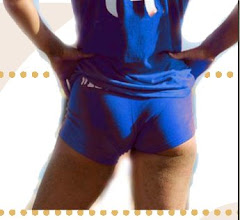